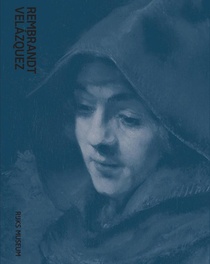 Rembrandt-Velázquez: Dutch and Spanish Masters presents the best work of two seventeenth-century master painters from the Netherlands and Spain. Works by Rembrandt and Velázquez are presented in a context of contemporaries and compatriots, including spectacular works by Zurbarán, Vermeer, Murillo, Hals, Valdés Leal, Torrentius, Ribera and others. Rembrandt-Velázquez focuses on themes such as religion and realism, beauty and emotion. Presented in pairs, the Spanish and Dutch masterpieces enter into a dialogue. In his essay Hans den Hartog Jager looks for the differences and similarities between two of the greatest painters of all time – and arrives at an unexpected conclusion. Cees Nooteboom takes the reader back to his memories of Spain and reflects on the history and art of the country he calls his second homeland. Gregor J.M. Weber is head of the Rijksmuseum’s Fine Arts department. Hans den Hartog Jager is an art critic, author and curator. Cees Nooteboom is a writer and lives alternately in the Netherlands and Spain.

Lees verder
Specificaties
The exhibition was organized for the occasion of The Year of Rembrandt 2019 and the 200th anniversary of the Museo del Prado in Madrid. The masterpieces were brought together for the first time thanks to a unique collaboration between the Museo del Prado in Madrid and the Rijksmuseum. The exhibition ‘Rembrandt-Velázquez. Dutch and Spanish Masters’ will be hosted by the Rijksmuseum from 11 October 2019 to 19 January 2020.